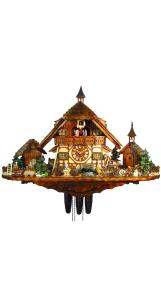 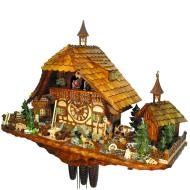 This cuckoo clock has an exclusive life-like wooden handpainted cuckoo. With certificate of authenticity from the Black Forest Clock Association (VdS). It has a mechanical extreme long-life rack strike movement. The 8 day running time movement need to be wind up once a week, that means you pull on the chains until the weights are up. It allows turning the hands left and right without endangering the mechanics of the movement. The music box is from the marketleader REUGE in switzerland. The size refers only to the clock, without pendulum and weights.
Cuckoo Clock with 8-day movement / running time (mechanical), with music and dancers. Each year, the Association of the Black Forest Clock organizes a competition for the most beautiful clock of the year. This year, in 2009, the competition was held at the Technik Museum Speyer. All cuckoo clock manufacturers of the Black Forest enter a clock into the competition. The visitors vote for the clock of the year. This is the winner 2009! This very large clock presents every detail, which stands for the uniqueness of a Black Forest Farm house. The focus with this clock is on specific traditional occupations on a Black Forest farm. The large figurine on the clock shows a farmer, leaning on his scythe, taking a break from the hay harvest. Right next to him, the almost full hay cart shows he's almost done with his day's work. A bit further on, in front of the small chapel, stands a shingle rack. This is a kind of work bench to produce roof shingles. (Unfortunately, this feature is hard to see on the fotos). During the hard winter months, when there was no work in the field, the farmers often cut shingles to earn some money. A very prominent feature of this clock is the construction of the clock itself. Unlike other clock models, this clock has individual outhouses, realised as complete buildings themselves. Usually, these annexes are only hinted at by attaching a little shed to the side of a clock. In this case, the chapel to the right and the storage shed to the left are complete little buildings. Thus an entire Black Forest farm ensemble, with a main farmhouse, annexes, and surroundings, is shown in one impressive clock. Many Black Forest farm houses had their own chapel, because the way to the next village church was too far or often impassable during the winter snows. The name of the clock comes from the little boy figurine to the left of the clock, in front of the little shed. He is carrying a little goat... The clock house itself represents the specific building techniques of the Black Forest. A typical shingle roof, timber frame building. Black Forest farm steads are often isolated buildings spread thin over the hilly countryside. A characteristic of such a farm house is the bell tower with the fire bell on the roof. In the case of an emergency, help could be called with these bells. In integral part of farm life are the animals; this clock shows various household animals like a cat and a German Shepherd dog, but also typical farm animals like the cow. All figurines and decorative elements are made of wood and are hand-painted. The dancing figurines are high quality dancing pairs, waring Black Forest costume. All parts made of wood, wooden dial, hands, cuckoo, pendulum. The music movement has two melodies and 36 voices. The melodies change every hour from the Happy Wanderer and Edelweiss.
Wooden dial and hands, nice-carved bird, night shut off, old made brown chains, door of the bird is made with an metal hinge, case with handmade shingles, extra deep carvings.
5 years product warranty.